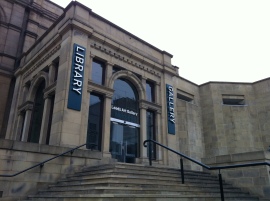 Andrew Godfrey (Sicker than Thou, The CF Diaries) has done a wonderful report on the Graphic Medicine conference on his blog.

Thriving, eclectic, warm, encouraging, inspiring, and with plenty of laughs to be had, this open discourse between artists, academics, and health care professionals is surely an optimistic sign of the times.

Thanks, Andrew – and not just because you said nice & helpful things about my talk. (But that’s certainly not discouraged. I had an artist patient who once told me, “I show my work to other people so they can tell me what they see.” I very much had that feeling when reading Andrew’s discussion of my work, and the feedback is greatly appreciated.)

I’m currently editing the audio from room B of the conference. Like with Chicago, it’s quite nice to revisit talks I enjoyed, as well as hear for the first time ones I was forced to miss. Ian Hague will be posting the audio on the Comics Forum site in the near future. (And don’t forget we also have some audio from the Chicago Graphic Medicine conference available here.) Fingers are crossed that the Laydeez do Comics event that Ian mentioned in his post will be available on the Panel Borders podcast as the ever-professional and amazing Alex Fitch recorded the event. As a hardcore audiophile, his work in London is greatly appreciated on this side of the Atlantic. Do also check out the wonderful sketch notes taken by Shamisa Debroey at the Laydeez event!

I could go on and on about how amazing my trip to North Wales, Leeds & London was, or how happy I am about all the wonderful, talented people I was able to meet, but instead I’ll share one story from my table at the Thought Bubble comicon.

Two women with six kids under ten approached my table. One woman was pushing a young boy in a wheelchair, who was very pale, wearing oxygen, and clearly not well. The other woman, apparently her sister, said, “Look, Comic Nurse.” The woman pushing the boy in a wheelchair said, motioning toward the boy, “I’ve had about enough of nurses, if you don’t mind.” The sister persisted, interested in my comics, and held the group from moving on. While she was looking at my books, the youngest of the kids took one of the pens I was offering to attendees and said,”Now I need paper.” He was admonished for asking by the women, but I insisted he was absolutely right. They discouraged him, saying he can’t draw while walking around the event. Refusing to let his urge to create go unattended, I took a large sheet of paper, and showed him how to fold it up to make a comic. The other kids then each demanded their own DIY comic book, and I obliged. As I was doing so, the first boy started sketching, proving his guardians wrong, and creating an adorable character who hopefully will go on to have amazing adventures. I wish the same to all of you.